Lima, Nov 9 (efe-epa).- Peru’s Congress voted for the ouster of President Martín Vizcarra on Monday after declaring him ‘morally incapable’ during his impeachment trial.

With 105 votes in favor, the so-called “vacancy motion” brought against the president due to accusations that he committed acts of corruption when he was governor of the southern province of Moquegua (2011-2014), exceeded the number required by the constitution (87 out of 130 members) and automatically paved the way to strip Vizcarra of the presidency

Consequently, “the succession regime established in the constitution” will be applied, which will be effective as soon as it is communicated to the president, Prime Minister Walter Martos, or published in the official gazette, whichever comes first.

Now the responsibilities of the president will fall on the head of Congress, Manuel Merino, from the Popular Action party until general elections scheduled for Apr. 11 next year. He is expected to be sworn in as interim president on Tuesday.

Congress’ decision came as somewhat of a surprise. Although many legislators were already considering forcing Vizcarra’s dismissal, it looked as if there would not be enough votes for an ouster.

Vizcarra, 57, appeared early on Monday morning to present his defense. He categorically denied having received any type of bribe and slammed the impeachment process against him, saying it had been opened under accusations not corroborated by the justice system.

“There is no proof of flagrancy of a crime, nor will there be because I have not committed a crime, I have not collected a bribe (…) They are false facts, not corroborated, an investigation process is just beginning, they are hypotheses,” said Vizcarra.

However, most of the benches of Congress appeared hostile to the president from the beginning, accusing him of being a “liar,” “immoral,” “corrupt” and of being responsible for the country’s political instability.

Also constant were the declarations of the deputies who indicated that they would vote “for the country” and without considering “political calculations” or “media pressure,” all references to requests for calm and responsibility that the media, business associations and civil society groups asked of Congress, citing a risk that the fall of the leader could pose to the stability of the country.

The debate thus demonstrated the political abandonment of the president, who did not have party representation in the chamber and whom even the deputies who voted to keep him in power seemed to consider responsible for the acts of which he is accused. EFE-EPA 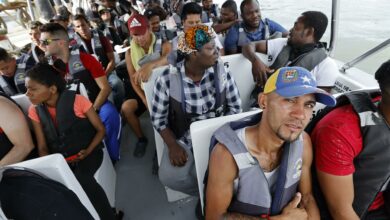 Putin calls for measures to resolve conflicts in post-Soviet space