Manila, Nov 3 (efe-epa).- Authorities in the Philippines are bracing for another typhoon that could hit the north of the country on Thursday even as people continue to piece together their lives shattered by typhoon Goni that left at least 20 dead.

With sustained winds of 80 km per hour, storm Atsani is approaching the north of the island of Luzon, as it gathers strength to turn into a typhoon.

“It’s not as powerful as Goni but it would cause damage in its path, on the roads and bridges,” President Rodrigo Duterte said Monday night in a televised cabinet meeting.

The natural disaster agency in its estimated in a report that at least 20 lives were lost in the devastation caused by Typhoon Goni, the most powerful typhoon of the year which crossed the Philippines on Sunday.

Goni is now on its way to Vietnam.

Authorities have evacuated at least 457,000 people in the Philippines in the wake of the trail of destruction left by Goni, especially in the province of Catanduanes.

Described by meteorologists as the strongest typhoon of the year, with gusts of up to 280 km per hour, the storm lost its steam while landing on the island of Catanduanes, in the northeast of the Philippines.

Goni, which came from the Pacific Ocean with strong winds, caused floods and landslides, mainly on the island of Luzon.

The island was also affected on Sunday by the tropical storm.

The Department of National Defense said the 16 deaths occurred in the Bicol region in the northeast of the Philippines.

The Philippines meteorology department has predicted that two to three typhoons would pass through the country in November and at least one in December.

An average of 20 typhoons hit the Philippines each year, the most destructive being Typhoon Haiyan, which in November 2013 hit the islands of Samar and Leyte, killing some 7,000 people and leaving 200,000 families homeless.

German shipping hit by low levels of Rhine due to drought 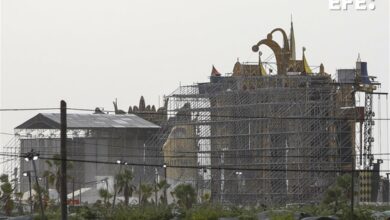