Lisbon, Jul 27 (efe-epa).- Portugal was put on high alert Monday over wildfires that have swept through parts of the country, exacerbated by high temperatures.

Authorities said a huge blaze in the Oleiros region, the worst so far this summer, has been brought under control after it broke out on Saturday.

The fire had spread to the neighboring towns of Sertã and Proença-a-Nova and around 850 firefighters and 270 ground-fighting vehicles were sent to tackle the flames.

Fire commander Luís Belo Costa said the wildfire was brought under control on Monday morning and that crews were working to avoid any reactivation.

“There is a lot of work ahead, as it is an extraordinarily large and complex site due to the terrain,” he added.

He estimated that around 6,000 hectares have been consumed by the flames.

He said crews would remain on the ground to monitor the situation amid strong winds and high temperatures.

A change in wind direction and a slight drop in temperatures during the night helped firefighters to extinguish the flames.

Belo Costa said there was no evidence of damage to homes after the partial evacuation of three nearby villages on Sunday as a precaution.

The area is rural and dotted with small towns which raised extra concerns with the authorities. 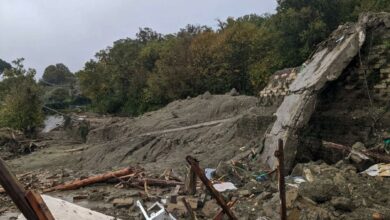