Dublin, Jul 12 (EFE).- Protestants in Northern Ireland were holding their traditional Orange Order parades on Monday amid rising tensions in the pro-British unionist community over the new post-Brexit customs border in the Irish Sea, known as the Northern Ireland Protocol.

Thousands of members of the Orange Order will parade through the streets of Northern Ireland to mark the Twelfth of July, the holiday with which they celebrate their ties to the United Kingdom, a relationship that their leaders warn is under threat from the country’s exit from the European Union.

The Order commemorates the victory of the Protestant King William III of Orange over the Catholic James II at the Battle of the Boyne in 1690, with marches that, in some cases, pass through nationalist-Catholic areas and often lead to serious clashes.

The marches were scaled down this year due to the coronavirus pandemic.

Up to 2,000 police officers were part of the security deployment to keep the peace during these festivities, whose bill rose to almost 1.5 million euros in 2019, the last time the parades were held after they were canceled last year.

The PSNI kept a particularly close eye on a rally in Tigers Bay, a Protestant area of north Belfast close to one of the so-called “peace lines,” the walls that separate the two communities.

Two nationalist ministers of the Northern Irish power-sharing Executive, led by the Protestant Democratic Unionist Party (DUP), went to court last week to ask for the cancellation of this bonfire, but the courts gave the green light.

Nationalist symbols were burned and in Tigers Bay on Sunday night a Republic of Ireland flag on top of the typical wooden pallet tower erected by the protesters was set alight.

“I know a flag was burned and I don’t approve of that at all,” Protestant pastor Brian Madden told the BBC, noting efforts by leaders on both sides to de-escalate tensions.

Another migrant caravan gets under way in southern Mexico 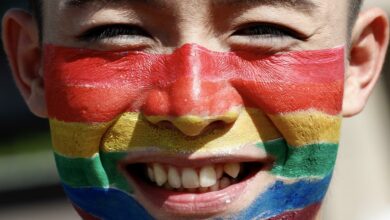 Asia: negatives outshine positives for LGTBI in continent of contrasts