Colombo, Apr 14 (EFE).- Protests against Sri Lanka President Gotabaya Rajapaksa over the economic crisis continued on Thursday amid Sinhalese New Year’s Day celebrations, while the government’s announcement of default on its external debt led to a downgrade in its risk evaluation by credit rating agencies.

Hundreds of protesters remained camped for the sixth consecutive day in front of the Presidential Secretariat in Colombo with their insistent slogan “Gota Go Home,” referring to the first name of the president.

Protesters at the so called “Gota Go Village,” amid their protests, observed the local tradition of boiling milk in a pot on the occasion of the Sinhalese new year.

The protests against Rajapaksa have served to being together people from different parts the country, regardless of their religion, which could be seen in the festivities.

“This is the first time we are celebrating the new year as Sri Lankans because all the ethnicities and religions are here today,” A. Saman, a 27-year old IT professional, told EFE.

People voluntarily brought traditional food consumed during the new year, such as rice cooked in milk, oil cake, and crisp and light sweetmeat, and distributed them among the demonstrators.

Hundreds of Sri Lankans started taking to the streets in late March to protest their plight amid the severe economic crisis, with continuous power cuts of up to 13 hours, and endless lines at gas stations for fuel.

The protests have intensified since the weekend, prompted by Rajapaksa’s declaration of a state of emergency, curfew and a ban on social media.

Moreover, the police also used tear gas and water cannons to disperse the demonstrators, causing greater resentment among the people.

Since then, the protesters have come out daily in front of the president’s office, demanding the resignation of Rajapaksa.

“This struggle will end only when President Gotabaya Rajapaksa steps down and Rajapaksa family returns stolen money to the country,” stressed Saman.

However, the president in his New Year message said Sri Lanka should overcome the challenge with “unity and better understanding.”

“The government is taking measures to secure the normal life of the people from the current complex situation by properly understanding these challenges,” Rajapaksa said in a statement.

According to analysts, the economic crisis in Sri Lanka will worsen unless it manages its debt sustainably, which according to Ministry of Finance data amounted to some $54 billion until the end of 2021 – 102.8 percent of its Gross Domestic Product – of which $20 billion was foreign debt.

Against the inability of paying creditors, the island nation announced Tuesday that it would temporarily suspend its external debt payments. 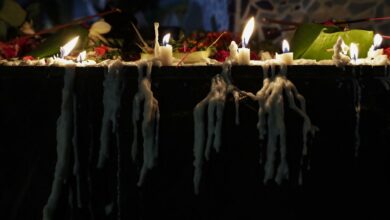