Holders Real Madrid – already qualified for the next round – suffered their first loss of the 2022-2023 season, falling 3-2 to RB Leipzig, who only need to avoid a loss against Shakhtar Donetsk on Match Day 6 to grab the second round-of-16 berth from Group F.

A point will also be enough for AC Milan when they face RB Salzburg next week in the battle for second place in Group E, but Dortmund’s draw with Manchester City consigned Sevilla, 3-0 winners Tuesday against Copenhagen, to the Europa League.

And on a day that saw City scoring machine Erling Haaland stymied by his former teammates, Lionel Messi and Kylian Mbappe each had a brace as PSG pummeled Maccabi Haifa 7-2.

Abdoulaye Seck had both goals for Maccabi, while Neymar and Carlos Soler scored for the Parisians, who also benefited from an own goal by visiting keeper Sean Goldberg.

Benfica led 3-1 at the break against struggling Juventus on goals by Antonio Silva, Joao Mario – from the penalty spot – and Rafa Silva, who made it 4-1 just five minutes into the second half.

Their backs against the wall, the Bianconeri narrowed the gap with goals in the space of three minutes by Arkadiusz Milik (who came in for first-half goal-scorer Moise Kean) and Weston McKennie.

The rally fizzled, however, and the closest either team came to scoring after that was a Rafa Silva effort that went over the cross-bar.

PSG and Benfica are level on 11 points, but the Parisians sit atop Group H on goal difference.

In Leipzig, the Red Bulls jumped out to a 2-0 lead thanks to Josko Gvardiol and Christopher Nkunku before Vinicius Jr. put Real Madrid on the board just before half-time.

Timo Werner scored for the hosts in 81st minute and Rodrygo’s successful penalty in stoppage time was not enough for the Blancos, who lead Group F on 10 points, 1 better than Leipzig.

Third-place Shakhtar are on 6 points after being held 1-1 Tuesday by already eliminated Celtic. The Scottish side went ahead with a goal in the 34th minute by Giorgos Giakoumakis, but Mykhalyo Mudryk brought the visitors level in the 58th.

Mudryk set up a potential match-winner for Shakhtar with 20 minutes left, only to see teammate Danylo Sikan miss the target from 10 yards out.

Dortmund conceded more than 70 percent possession to Man City, yet still managed to put four shots on target to three for the visitors.

Keeper Gregor Kobel stopped Riyad Mahrez’s penalty shot in the 55th minute and denied Julian Alvarez and Phil Foden on successive chances in the 67th to nail down the point for the home side.

City, with 11 points, are the Group H winners and Dortmund’s 8 points are enough to punch their ticket for the knockout stage, as they are 3 points better than Sevilla and would prevail against the LaLiga squad on head-to-head if they should end the group level.

Chelsea led Salzburg 1-0 at the break on Mateo Kovacic’s goal in the 23rd minute and would have had more if not for some terrific stops by home keeper Philipp Kohn to deny Thiago Silva, Kai Havertz and Pierre-Emerick Aubameyang.

The second half was a different story, as Junior Adamu scored for Salzburg in the 48th minute to bust the game wide open.

Kohn preserved the deadlock until the 64th minute, when Havertz beat him with a curling shot into the top corner. The action then shifted to the other end, where Blues keeper Kepa was tested several times in the final phase.

While Chelsea, with 10 points, are through to the next round, Salzburg and AC Milan will battle for the second spot in Match Day 6. 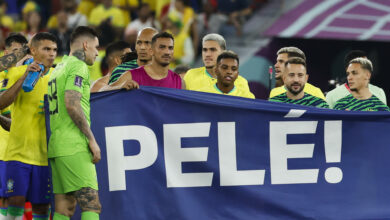