Madrid, Oct 5 (EFE).- Real Madrid and Manchester City remained perfect in the Champions League with wins in round-robin action on Wednesday, although the Blancos struggled to a narrow 2-1 home victory over Shakhtar Donetsk due to numerous missed scoring opportunities.

Carlo Ancelotti’s men wasted little time getting on the scoreboard in that Group F match, with Rodrygo firing a shot from the penalty arc in the 13th minute that entered the goal after slipping through the fingertips of netminder Anatoliy Trubin.

The fans at Santiago Bernabeu also didn’t have to wait long for a second goal.

That came in minute 28 when Rodrygo executed a perfect give and go with Karim Benzema before putting the ball on a platter for Vinicius Junior, who snuck a shot just inside the left post.

But just when the floodgates seemed to have opened, Vinicius squandered a couple of golden chances with only the Shakhtar goalie in front of him to give the visitors new life.

And when Oleksandr Zubkov scored on a left-footed volley in the area in the 39th minute, a match that should have been a rout was suddenly much too close for comfort.

The tension continued in the second half, with Fede Valverde repeatedly failing to find the mark from long range and Shakhtar creating a scoring opportunity with a run down the left side in the 53rd minute.

Real Madrid continued to create the lion’s share of the chances, but Rodrygo was unable to convert from close range in the 64th minute and Marco Asensio ricocheted a shot off the woodwork in the second minute of stoppage time.

Despite the subpar performance the Blancos remain perfect in Group F with three wins in as many matches.

Elsewhere, Erling Haaland’s brilliance across all competitions continued on Wednesday as he netted a brace in just 45 minutes of action in Manchester City’s 5-0 Group G victory over FC Copenhagen at Etihad Stadium.

The first came in the seventh minute when the Norwegian superstar received a pass from Joao Cancelo and sent a right-footed shot into the right side of the goal.

Haaland then made the score 2-0 in the 32nd minute when he tapped the ball home after Copenhagen netminder Kamil Grabara failed to corral a dipping long-range volley by Sergio Gomez.

Man City scored one more time before the break, with a long-range strike by Gomez once again paying off when the ball ricocheted off Davit Khocholava and into the goal in minute 39.

With victory all but assured at halftime, Man City head coach Pep Guardiola substituted for Haaland.

Even so, the hosts still dominated the action, making the score 4-0 on a penalty conversion by Riyad Mahrez in the 55th minute and notching one final goal on a tap-in by Julian Alvarez in the 76th minute.

With the win, Manchester City remain perfect in Group G with nine points in three matches. 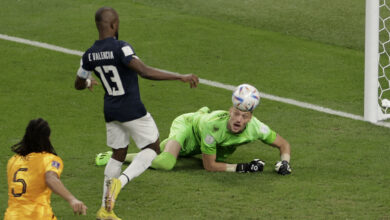