A source in the Iraqi Interior Ministry told Efe on condition of anonymity that the missiles came down near the US Embassy in what is officially designated as the international zone, where most diplomatic missions and key government offices are located.

The Joint Operations Command, which coordinates all of Iraq’s security agencies, confirmed the attack in a statement that accused those who launched the rockets of seeking to “weaken the state.”

There were no reports of casualties.

Prime Minister Mustafa al-Kadhimi, who is also commander-in-chief of the armed forces, ordered an investigation and appealed to citizens to cooperate in identifying the assailants.

The attack coincided with Zarif’s first visit to Baghdad since the January assassination here of Iranian Revolutionary Guard Corps commander Qassem Soleimani, killed in a US drone strike shortly after arriving on what Tehran said was a diplomatic mission.

Zarif met with his Iraqi counterpart, Fuad Hussein, and with President Barham Salih.

“Zarif assured me that Iran’s wish is for a strong Iraq and I reminded him that our wish is for there to be no interference in our internal affairs,” Hussein said in a joint televised appearance with his guest at the end of their meeting.

The Iraqi foreign minister also stressed the “need to keep Iraq out of international tensions to protect its sovereignty,” referring to the escalation of tensions earlier this year between the United States and Iran following Soleimani’s killing.

“Iran-Iraq relations will never be shaken,” Zarif said, praising “the role Iraq plays in the region”.

He called Soleimani’s death a “great loss” in the fight against Islamic State, which operates in Iraq and Syria.

Iraqi state television showed images of Zarif on his arrival at Baghdad International Airport, where he posed with a photograph of Soleimani at a memorial near the site of the drone strike.

The assassination sparked an exchange of hostilities between Washington and Iran on Iraqi soil.

Iraq “cooperates with its allies in the framework of mutual respect and non-interference in internal affairs,” Salih’s office said in a statement issued after the president’s talks with Zarif.

The statement also praised Iran’s efforts in the fight against terrorism.

Al-Kadhimi is due to travel Monday to Saudi Arabia for discussions with Crown Prince Mohammed bin Salman.

The Iraqi prime minister is then set to make his first visit to Iran before heading to Washington for talks with US senior officials. EFE 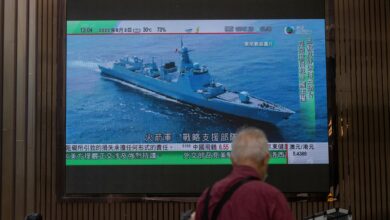