Paris, May 3 (EFE).- Polarization amplified by information chaos is the pressing concern highlighted in this year’s World Press Freedom Index published by Reporters Without Borders (RSF).

In its 2022 report published Tuesday on World Press Freedom Day, the Paris-based organization evaluated the state of journalism in 180 countries.

It warned that information chaos caused by a “globalized and unregulated online information space that encourages fake news and propaganda” has amplified polarization two-fold – media polarization fueling divisions within countries, as well as polarization between countries at the international level.

In the 20th edition, RSF points to the development of opinion media that follow the model of the conservative American chain Fox News, and to the spread of disinformation circuits amplified “by the way social media functions.”

“At the international level, democracies are being weakened by the asymmetry between open societies and despotic regimes that control their media and online platforms while waging propaganda wars against democracies. Polarization on these two levels is fueling increased tension,” RSF said.

“The invasion of Ukraine (ranked 106th) by Russia (155th) at the end of February reflects this process, as the physical conflict was preceded by a propaganda war,” RSF highlights in its analysis of the rankings.

RSF Secretary-General Christophe Deloire pointed out that “Margarita Simonyan, the Editor in Chief of RT (the former Russia Today), revealed what she really thinks in a Russia One TV broadcast when she said, ‘no great nation can exist without control over information.'”

“The creation of media weaponry in authoritarian countries eliminates their citizens’ right to information but is also linked to the rise in international tension, which can lead to the worst kind of wars,” he said.

Russia’s war in Ukraine is causing “devastating” consequences for the press in the region, with at least five journalists and media workers killed since the invasion, and sources deliberately targeted by the Russian army.

RSF also highlights that China (175th) has used its legislative arsenal to confine and isolate from the world its population, and more specifically that of Hong Kong (148th), which has plummeted considerably in the 2022 rankings.

“Media polarization is feeding and reinforcing internal social divisions in democratic societies such as the United States (42nd) … (while) the increase in social and political tension is being fueled by social media and new opinion media, especially in France (26th),” RSF said.

“Suppression of independent media is contributing to a sharp polarization in ‘illiberal democracies’ such as Poland (66th), where the authorities have consolidated their control over public broadcasting.”

The international analysts took into account on this occasion five new indicators to give an overview of press freedom: political, legal, economic, sociocultural and security contexts.

The situation for journalists is “very serious” in a record 28 countries, including Russia and Belarus, whose classifications have been analyzed in early 2022 after the invasion of Ukraine. It is “difficult” in 42 countries, “problematic” in 62 countries and “satisfactory” in 40 countries, showing the imbalance at a global level.

At the bottom of the list sits North Korea (180th) followed by Eritrea, Iran, Turkmenistan, Myanmar, China and Vietnam. EFE

Banksy exhibition’s tour of Latin America kicks off in Chile 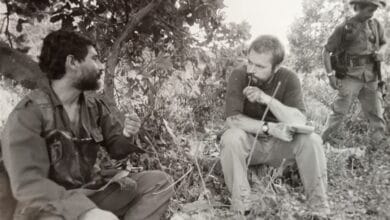