“The flight lasted 3 hours and 20 minutes. This is the best result in the entire history of space flight,” Dmitry Rogozin said on Twitter.

According to the Russian space corporation, the previous record was set by the Progress MS-12 freighter, which in 2019 took an extra 30 seconds to reach the ISS.

Progress took off at 01. 51 GMT, as scheduled, according to the Russian Flight Control Center, which added that “the flight is proceeding normally.”

The flight was carried out on the so-called super-fast two-lap trajectory and the Progress 75 cargo ship docked at 1. 12 a.m. EDT to the Zvezda Service Module on the Russian segment of the station, just over three hours after blasting off from the Baikonur Cosmodrome in Kazakhstan.

The freighter was received at the station by Russian cosmonauts Anatoli Ivanishin and Ivan Vagner, and NASA astronaut Christopher Cassidy, who arrived at the ISS aboard the manned spacecraft Soyuz MS-16 on 9 April.

The Soyuz-2.1a carrier rocket arrived with about two tons of cargo for the ISS crew including 420 kilograms of water, 46 kg of oxygen, 700 kg of fuel, 1.5 tons of water, 1,350 kg of dry cargo, scientific equipment, food and medicine.

The move comes as part of Russia’s commemoration of the 75th anniversary of the Soviet victory over Nazi Germany towards the end of World War II in May 1945.

The coronavirus pandemic has forced the Russian government to cancel all public celebrations to mark the anniversary on 9 May, an unprecedented decision in almost six decades.

As such, the launch of Victory rocket took on a special meaning for Russians.

An allegorical insignia to the anniversary was engraved on the carrier rocket, along with a St. George ribbon, made up of black and orange bands, and Soviet World War II paraphernalia.

Minutes before launch, CEO of Energia rocket manufacturer Nikolai Sevastianov said that “unprecedented steps were taken to disinfect the rocket and spacecraft” to prevent the arrival of the new coronavirus on the ISS.

Currently onboard the ISS are three crew members, Russian cosmonauts Anatoli Ivanishin and Ivan Vagner, and NASA astronaut Christopher Cassidy, who, according to Roscosmos, have already practised all the necessary manoeuvres to unload the freighter. EFE-EPA 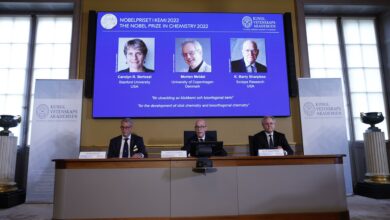