Sports Desk, May 22 (EFE).- Maria Sakkari on Sunday booked a place in the French Open second round, while her fellow top-10 seeded Garbiñe Muguruza and Ons Jabeur did not make the cut.

The Greek, the fourth seed, needed about 90 minutes to defeat France’s Clara Burel 6-2, 6-3 to take the first step towards equaling her best Grand Slam run, which came a year ago in Paris when she reached the semifinal round.

For a place in the third round, she will play Karolina Muchova who defeated Carole Monnet in straight sets.

Tunisia’s Jabeur was not as lucky, as the sixth seed squandered a one-set lead to lose to Poland’s Magda Linette 3-6, 7-6, 7-5 in just under two-and-a-half hours.

Jabeur was one of the favored contenders, being the most successful player on clay this season with 17 victories, the Madrid Open title and the finals in the Italian Open and Charleston included.

Muguruza was unable to make it past the first round at the French Open for the second year in a row, losing to Kaia Kanepi of Estonia 2-6, 6-3, 6-4 in two hours and six minutes.

Kanepi next will play against Beatriz Haddad Maia of Brazil, who defeated Spain’s Cristina Bucsa 6-3, 1-6, 6-2. EFE 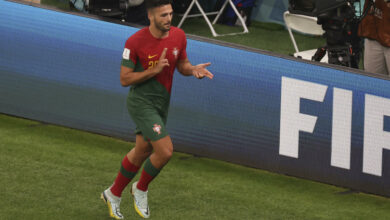