Rio de Janeiro, Apr 12 (EFE).- While the religious faithful dust off statuettes of the Virgin Mary and crucifixes for the Holy Week processions, amid painting, soldering, sewing and sequins hundreds of highly creative people from the samba schools are putting the finishing touches on floats and costumes for the Rio de Janeiro Carnival parades, a huge show that, after being temporarily extinguished due to the Covid-19 pandemic in Brazil, will resurrect itself a few days after Easter at the city’s Sambodrome.

Canceled in 2021 due to the pandemic and postponed for two additional months this year – also due to the virus – the samba schools were anxious to put on their parades and once again entertain and excite their fans, this time from April 20-24.

Carnival – a term derived from the Italian phrase “carne vale” (goodbye to meat) – is traditionally held before Ash Wednesday in the Catholic faith as a final blowout before the 40 days of abstinence from meat, alcohol and other worldly pleasures during the so-called Lenten fasting period.

At least weeks before the event, hundreds of artisans, solderers, carpenters, designers, seamstresses, choreographers, architects and mechanics get all the costumes and floats ready in Samba City, work that EFE witnessed despite the fact that it is undertaken amid strict secrecy.

The work is being carried out in downtown Rio, just a couple of blocks from the city’s port in a 92,000 square meter space (990,000 square feet), equivalent to about 14 soccer fields.

There, the teams from the 12 samba schools belonging to the Special Group are working in their warehouse areas to perfect the accessories that will give their parade performances “the magic touch,” performances that make up the planet’s greatest open-air show due to the originality of the costumes, the colorful and majestic nature of the floats and the rhythmic joy of the music.

Outfitted with facemasks, protective head gear and special glasses, some of the workers devote hours to soldering metal to create the supports and struts for the samba dancers on the floats, while workers in the painting department provide bright colors on dozens of objects adorning and filling up the space on top of the floats.

Things and people are always in motion in the warehouses, with workers moving gigantic pieces of floats here and there or attaching foam and padding at certain points, and order and cleanliness are definitely not the priority.

Pieces of cloth and fabric litter the floor in the sewing section, with multicolored parts of costumes or floats spread out here and there over tables and everywhere else.

Some 400 people work in shifts from dawn until into the night, and they seem to be in good spirits, laughing and smiling, although the rhythms of the workshops dominate the area, with hammering and the sound of soldering irons taking precedence at times and then receding temporarily.

Set designer and Carnival organizer Marcia Leal told EFE that “We’ve been doing this Carnival project for two years and two months with the hope of putting it into practice,” adding that her husband Renato Lage is helping her coordinate the float design and choreography for Portela, one of the most traditional of Rio’s samba schools and which, with 22 first-place awards over the almost 100 years of its existence, is the biggest winner of Carnival titles.

Organizing and preparing everything for each huge show takes more than 10 months from selecting the theme to establishing the music and then assembling the floats and costumes.

Sheila Batista, who coordinates the adornment for Portela’s floats, has been giving life to these parades for more than 20 years, and she said that returning to the workshop has been one of the best experiences of her life.

“I was used to working every year with the Carnival and, all of a sudden, everything stopped and you’re left without any income and without any structure,” she said.

Since last year and little by little – because of the various pandemic restrictions – the members of this big Portela family began coming back to the workshop to help prepare for the parade, which this year will pay homage to the sacred baobab tree.

Portela will parade on April 23 with more than 3,000 people – dancers and other costumed participants – working in its elaborate show, and once again everyone is hoping to take the title. 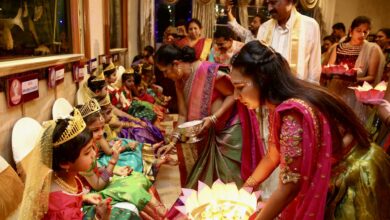 India celebrates Dussehra with gusto after 2 years of Covid restrictions