Jakarta, Apr 22 (EFE).- With the deployment of five ships and a helicopter, Indonesian authorities continued Thursday the search and rescue for a submarine that disappeared with 53 crew members on board during a series of naval exercises.

More than 400 people were collaborating in the mission to trace the waters north of the island of Bali where contact with the vessel was lost Wednesday, Achmad Riad, director of the Indonesian Armed Forces Information team, said at a press conference.

Singapore, Malaysia and Australia have offered their help by sending ships to reinforce the rescue mission.

The Singaporean navy will dispatch a vessel used to detect submarines expected to arrive in the area Saturday; while a Malaysian ship will arrive Monday, Riyadh said.

Australian Foreign Minister Marise Payne told public broadcaster ABC on Thursday that Australia’s navy “will help in any way it can” and that they were in contact with Indonesia.

The KRI Nanggala-402 submarine, manufactured in Germany in 1977, disappeared while conducting military exercises with torpedoes at a depth of about 700 meters.

The Army spokesman said the ship began the dive at 3:46 a.m. local time (20:46 GMT on Tuesday) and that the loading of torpedo tube number 8 began about 15 minutes later.

The last communication with the submarine took place at 4:25 local time (21:25 GMT on Tuesday) and before authorizing the torpedo’s launch, connection with the vessel was lost.

Four hours into their search, a helicopter team located a fuel leak near the area where the submarine disappeared.

A letter from the army signed Apr. 16 to which EFE had access invited the media to cover the military exercises planned for Thursday of the KRI Nanggala-402, which included exercises with cannons, rockets and torpedoes in the Strait of Bali, which separates it from Java.

Indonesia has a fleet of five submarines, two made in German — including the missing one — acquired in 1981, and three from South Korea. EFE 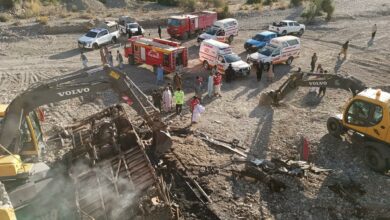