Dubai, March 9 (EFE).- Ukraine’s pavilion at Dubai Expo 2020 has become a bastion of solidarity and its walls are awash with hand-written messages from visitors from around the world.

“We are with you”, “God bless Ukraine” and “Make love, not war” are some of the most common messages among the thousands of colorful post-it notes that fill the pavilion of the World Expo hosted this year by the United Arab Emirates.

“These solidarity murals were not an idea of ​​the pavilion staff or communication managers, it all started when two children asked if they could hang messages of support on the pavilion wall. Then many adults copied them,” Kateryna Moroz, a contractor of the Ukrainian pavilion, told Efe.

Now, visitors are provided with colorful cards and markers and are given a blue and yellow ribbon, the colors of Ukraine’s national flag.

Viewers can also take a selfie with a life-size image of Ukraine’s President Volodymyr Zelenskyy, who also appears in a video saying they will defend the country’s territorial integrity and “internationally recognized” borders.

Efe spoke to several visitors who showed their support by penning a message of their own.

Luisa Costa, from Portugal, said she was “feeling very close” to the suffering caused by the war and Brit Laura Shaw urged “for peace to return soon”.

Some 40 employees work in the pavilion – almost half of them have traveled from Ukraine.

While they have said that they will see out their commitment at the Expo, which runs until the end of the month, they hope to be reunited with their families, many of whom have been forced into exile in neighboring countries.

“We cannot know what the future holds for us, there are many unknowns,” Maria Yahya, a volunteer from Kiyv, told Efe.

“Sometimes I feel guilty for being here, but I feel that what we do is important,” she added.

In a letter addressed to the secretary-general of the International Exhibitions Bureau (BIE), Ukraine’s Minister of Economy, Yulia Svyrydenko, denounced Russia’s “unjustified” attack.

Svyrydenko appealed to the BIE to close the Russian pavilion and for Moscow to be excluded from the list of candidates to host Expo 2030.

The next World Expo will be held in Osaka (Japan) in 2025 but the BIE General Assembly still has to agree on a venue for Expo 2030, with Moscow (Russia), Rome (Italy), Busan (South Korea) Riyadh (Saudi Arabia), and the Ukrainian city of Odessa all vying to become hosts.

The Russian pavilion, which features a giant human brain and several multimedia exhibits on Russia’s contributions to science, at this year’s edition remains open.

Expo Dubai, under the slogan ‘Connecting Minds, Creating the Future’, will run until March 31. 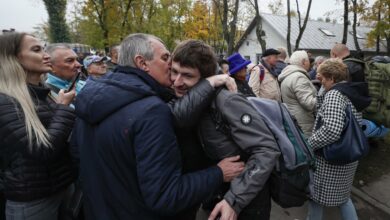