Seoul, Jan 3 (EFE).- South Korean President Moon Jae-in said Monday that he would push for a diplomatic breakthrough for an “irreversible path to peace” with North Korea in his last months in office.

“I will not stop efforts to institutionalize sustainable peace (with North Korea),” Moon said in a televised address, months before his five-year term ends in May.

He said the international community would respond if the two Koreas resumed dialog and cooperation to normalize inter-Korean relations.

“The government will pursue normalization of inter-Korean relations and an irreversible path to peace until the end. I hope efforts for dialog will continue in the next administration too.”

He referred to his initiative to adopt a declaration of peace with North Korea and other countries to end the 1950-53 Korean War.

The war led to the division of the peninsula before it that ended with an armistice, not a peace treaty.

Seoul claimed last week that it had “virtually” agreed with Washington on a draft declaration to end the war.

The declaration may have a Chinese approval even as official sources have stayed tight-lipped on that and Pyongyang has also made no mention of the proposal.

“Peace is an essential prerequisite for prosperity. But, peace tends to be shaken if it is not institutionalized,” Moon said.

Moon’s address came a day after North Korea concluded a key party meeting on national policy and a diplomatic roadmap.

North Korean leader Kim Jong-un did not mention the South Korean peace overtures or refer to the stalled denuclearization talks with the United States.

The peace talks have stalled since the failed Hanoi summit in 2019 between Kim and the then-US president Donald Trump.

Moon’s single, five-year term ends in May, and the presidential election will be held on Mar.9.

The South Korean president said he hoped the upcoming presidential election to become “an election for unity that includes people’s hope, not confrontation, hatred and division.” 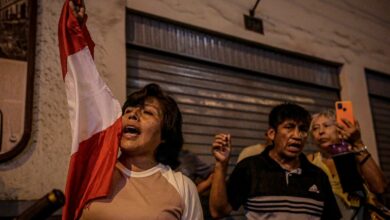