Miami, US, Feb 2 (efe-epa).- A prototype of a SpaceX Starship rocket exploded on landing during the second full high-altitude test flight in two months Tuesday.

The Starship serial number 9 (SN9) is a stainless steel prototype of the rocket with which SpaceX aims to put satellites into orbit around Earth, and cargo and people onto the moon and Mars.

The massive spacecraft took off from Boca Chica, Texas powered by three Raptor engines and reached its target height of 10 kilometers.

However, as with the previous test of the SN8 on Dec. 9, the SN9 exploded on landing, creating a fireball six minutes and 26 seconds after take-off.

“We had, again, another great flight up … we’ve just got to work on that landing a little bit,” SpaceX engineer John Insprucker said during a live broadcast.

“We’ve got a lot of good data, and the primary objective to demonstrate control of the vehicle and the subsonic re-entry looked to be very good,” he added.

The aerospace company is known for adopting an aggressive strategy to rapidly advance its spacecraft development program and learning from its mistakes, which has led to explosions in the past.

The 50-meter long Starship is the great hope of Elon Musk’s firm and aims to be “the world’s most powerful launch vehicle ever developed.”

“A controlled aerodynamic descent with body flaps and vertical landing capability, combined with in-space refilling, are critical to landing Starship at destinations across the solar system where prepared surfaces or runways do not exist, and returning to Earth,” SpaceX said on its website.

“This capability will enable a fully reusable transportation system designed to carry both crew and cargo on long-duration, interplanetary flights and help humanity return to the Moon, and travel to Mars and beyond.”

SpaceX has been building several prototypes of the Starship simultaneously at its facilities in Boca Chica, and the SN10 was visible on a launch pad Tuesday.

The company has also obtained a contract with the National Aeronautics and Space Administration to deliver supplies, materials and equipment to the International Space Station.

On Monday, SpaceX announced that at the end of this year it will launch Inspiration4 from Cape Canaveral, Florida, the “first all-commercial astronaut mission” to orbit Earth. EFE-EPA 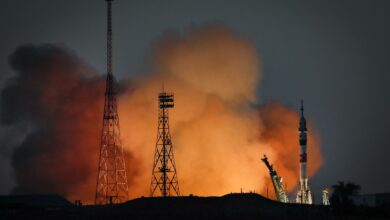 Spain’s Hispasat launches its most advanced satellite from US