The 19-year-old achieved that feat when second-ranked countryman and all-time great Rafael Nadal was eliminated from the ATP Finals in Turin following two consecutive straight-set losses.

Alcaraz began the year ranked No. 32 but stormed into the top 10 thanks to his surprise run to the Miami Open title in early April and then a strong clay-court season that included titles in Barcelona and Madrid.

He arrived in New York in August for the US Open ranked fourth in the world; two weeks later he walked away with the trophy and the No. 1 ranking.

By winning his maiden Grand Slam title at the age of 19 years, 4 months and 6 days, he became the youngest world No. 1 in ATP Tour history (dating back to 1973) and the youngest US Open champion since American great Pete Sampras in 1990.

Alcaraz clinched the year-end No. 1 despite not being able to compete in this week’s elite, eight-man ATP Finals or the knockout stage of the Davis Cup Finals later this month in Malaga, Spain, due to an injury that he described on Twitter as an “oblique muscle tear in the left abdominal wall.”

His absence left the door open for two players to chase down the No. 1 spot in the final ATP Tour event of the season.

Greek world No. 3 Stefanos Tsitsipas’s chances rested on sweeping all five matches at that indoor hard-court event – three victories in the round-robin phase plus wins in the semifinals and finals.

That longshot bid ended, however, when he lost to Serbian all-time great Novak Djokovic 6-4, 7-6 (7-4) in his opening round-robin contest on Monday.

Nadal, for his part, could have overtaken Alcaraz by either winning the tournament or by losing in the final against anyone other than an undefeated Tsitsipas and not dropping any matches in the round-robin stage.

But the Spaniard, who has struggled in recent months with an abdominal injury that he suffered at Wimbledon and is now on a four-match losing streak for the first time since 2009, was eliminated from the tournament on Tuesday.

The winner of a record 22 Grand Slam men’s singles titles lost his first round-robin match in straight sets to American Taylor Fritz 7-6 (7-3), 6-1 on Sunday and his second match to Canada’s Felix Auger-Aliassime 6-3, 6-4 on Tuesday.

Nadal was then eliminated from the event when Norwegian world No. 4 Casper Ruud won the first set of his match Tuesday night against Fritz. Ruud eventually won that contest 6-3, 4-6, 7-6 (8-6) to book his spot in the semifinals.

The ATP Tour said Alcaraz will travel to Turin on Wednesday and be honored for his achievement in a nighttime ceremony on center court at the Pala Alpitour. EFE 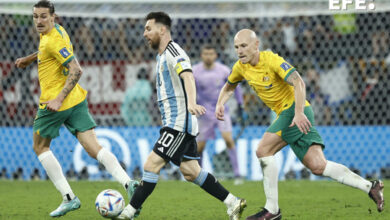 Dutch advance to World Cup quarterfinals with win over US