Kabul, May 5 (EFE).- Taliban captured its first district, located in the insecure northern Baghlan province in Afghanistan, after the United States and NATO forces began their final phase withdrawal on May 1, officials said Wednesday.

The remote Burka district in the remote northeastern part of the province fell to the insurgents after being subject to constant attacks over a long period of time.

“Burka district fell to the Taliban last night around 10pm because of the continued attacks from the enemy,” Baghlan police spokesperson Javid Basharat told EFE.

During the fighting overnight, Taliban suffered “heavy casualties” but the exact number remains unknown, while the Afghan security forces did not suffer any loss of personnel.

“During the tactical withdrawal, Afghan forces left the district in order to avoid casualties to the forces and are now stationed in another location. They transferred all their vehicles and facilities successfully during the withdrawal,” Basharat said.

Afghan security forces are planning a counter-attack to recapture the district and push the militants out of the area.

Taliban spokesperson Zabihullah Mujahid, in a statement, confirmed they had captured Burka district headquarters, including administrative and police buildings, and with all the defensive check-posts.

“After the enemy fled the area, a number of vehicles and a lot of weapons and ammunition were captured” by the Taliban fighters, according to Mujahid.

The Taliban have significantly ramped up attacks across the country immediately after the United States and NATO forces began the last phase of their pull out of the country on Sunday.

During this final phase of withdrawal, nearly 2,500 US forces and around 7,000 NATO forces are expected to quit the country ahead of Sep. 11, which marks two decades of war between Washington and the Taliban.

Meanwhile, a large scale fighting continues since Monday in southwestern Helmand province, where the Taliban captured more than 10 check-posts of the security forces around the city of Lashkargah before a heavy counterattack by the Afghan commandos.

The Ministry of Defense said in a statement Wednesday that 80 Taliban fighters have been killed and 59 were injured in counterattacks by the security forces in the past 24 hours in seven of the 34 provinces. 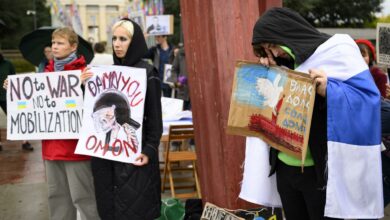