Kabul, Jan 25 (EFE).- The de facto Taliban government in Afghanistan Wednesday condemned the burning of a copy of the holy Quran by a far-right politician in The Hague.

The Islamist regime asked the Dutch government to punish the perpetrator of the act that has hurt the sentiments of Muslims across the world.

“Do not allow his political activities and prevent the systematic humiliation, prejudice, and hatred against Islam,” a Taliban statement said, condemning the incident in the “strongest possible terms.”

The incident occurred on Monday when Edwin Wagensveld, A leader of the far-right group Patriotic Europeans Against the Islamisation of the West (PEGIDA), desecrated a copy of the Quran before setting it on fire in the Netherlands.

The move unleashed a wave of outrage in the Muslim world.

The sentiments ran high as Muslims were already angered by the burning of the holy book by another far-right anti-Muslim provocateur three days earlier in Sweden.

Rasmus Paludan, a Danish lawyer and also a Swedish national, burned a copy of the Quran in front of the Turkish embassy in Stockholm.

He also held a caricature depicting the prophet Muhammed that Muslims say was insulting to the most-revered figure in Islam.

The Taliban asked the Islamic countries to “stand united and prevent such acts, so the Muslims could defend their religion effectively.”

Hundreds of people took to the streets in the southern Khost province on Tuesday to protest.

The scholar said such acts cause hatred between different faiths and “damage peace of the world.” EFE 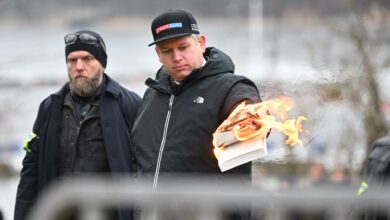