Bangkok, Oct 13 (efe-epa).- Thai police on Tuesday detained at least 21 student activists on the eve of a scheduled demonstration in Bangkok calling for fresh elections and curbs on the power of the military and royal family.

The detainees were picked up by police during a smaller protest near a stage set up for Wednesday’s demonstration at Democracy Monument in central Bangkok.

The site has become the nerve center for student-led protests since July.

Police said the protests on Tuesday were illegal because they blocked the flow of traffic.

Security forces were preparing to dismantle the stage area erected for Wednesday’s demonstration, in which protesters are expected to march on the government headquarters.

Prime Minister Prayut Chan-ocha said he would boost police presence ahead of the demo.

Grouped together under the People’s Party civil coalition, the protests have been spear-headed by student organizations seeking to alter Thailand’s constitution, which they consider anti-democratic given it was tweaked by the military junta in power between 2014-19.

The student protesters have held events and rallies in the Thai capital almost every day since July. The demonstration slated for Wednesday coincides with the pro-democratic movement of 1973.

They are also calls to reform the Thai royal family, a taboo topic in a country with some of the strictest lèse-majestés in the world and where criticizing the king can be punished with up to 15 years in prison.

King Vajiralongkorn, who spends much of his time in Germany, arrived in Thailand last week ahead of his planned participation in public religious ceremonies and an event marking the anniversary of the death of his venerated father Bhumibol Adulyadej, who died on this day in 2016.

The royal agenda is yet to be made public. But the king, who traveled with Queen Suthida and his royal consort Sineenat Wongvajirapakdi, is expected to take part in his longest visit to the country this year.

His average visit is usually less than 24 hours.

The anti-government protests scheduled for Wednesday are set to take place not far from a religious event presided over by the king at the Grand Palace.

Student leaders are calling for a reform to prevent the monarch from holding influence over Thai politics via the military. The late king Bhumibol gave his backing to a number of military coups.

So far the demonstrations have been peaceful but there are fears that they could be met with the kind of violent oppression witnessed in 1976, 1992 and 2010.

After being put on hold due to the Covid-19 pandemic, marches returned to Bangkok in July and on 10 August student activists from Thammasat University in Bangkok read out a list of 10 demands.

Among other things, they accused Vajiralongkorn, 68, of extending his control over the military and consolidating the personal wealth of the royal family, which is estimated to be around $35 billion. EFE-EPA 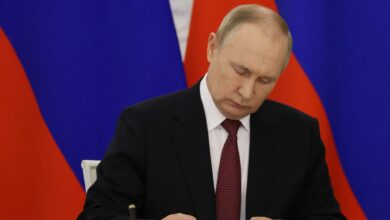