Bangkok, Aug 12 (EFE).- Thailand logged a record number of daily Covid-19 infections Thursday amid a climate of tension due to clashes between the authorities and protesters who are demanding the resignation of Prime Minister Gen. Prayut Chan-ocha over his handling of the coronavirus pandemic.

Thailand had successfully prevented the spread of the virus last year but the situation began to deteriorate in April following an outbreak detected in nightlife venues in Bangkok.

The country has recorded 839,771 confirmed cases since the start of the pandemic, of which more than 95 percent have been detected since April, and 6,942 deaths, almost 99 percent during the current wave.

The Thai government has imposed several measures until the end of August to curb infections including a nighttime curfew, a restriction on gatherings to five people and the closure of restaurants, malls and other establishments.

Public demonstrations are also prohibited, although this rule has been ignored by thousands of people who have turned out for anti-government protests that recently ended with violent clashes with the police.

Authorities arrested a dozen protesters Wednesday after some fired firecrackers at police and torched a traffic booth.

A 14-year-old protester was injured when a firecracker exploded in his hand and is receiving treatment at a hospital, where it was confirmed that he is infected with Covid-19, authorities said Thursday.

The protests, which began a year ago with the aim of demanding various democratic reforms in the country, have resulted, since the weekend, in violent incidents against the authorities, which have used tear gas, water cannons and rubber bullets to disperse protesters.

Protesters demand the immediate resignation of the Thai prime minister, who led a coup in 2014 and won the controversial elections of 2019, as well as the other members of the government for their handling of the Covid-19 pandemic.

The Tha Lu Fah group, one of the organizers of the protests, convened a new demonstration on Friday in the heart of Bangkok, while another group said that it will stage protests in the historic center of the capital on Sunday. EFE 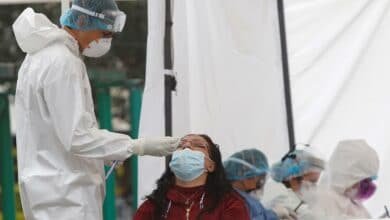