Chernihiv, Ukraine, Apr 11 (EFE).- Igor Mansurov surveys what is left of a fiber optic cable factory that until recently was his place of work, a manufacturing jewel in Ukraine’s Chernihiv region that was reduced to rubble when the invading Russian forces used it as a missile launching base.

“Look, these cables were ready to be shipped to Poland,” the technical engineer for Utex tells Efe.

Kilometers of fiber optic cables lie among ruined machinery and missile casings left behind by Russian troops who used the spot to bombard the city of Chernihiv.

The projectiles measure eight centimeters in diameter by 2 meters in length and are designed to hit targets up to 40 kilometers away — the factory is just 10 kilometers from Chernihiv city.

Ukraine’s northernmost region — and one of its poorest — became a gateway for Russian invaders in their ultimately failed bid to occupy central Ukraine and Kyiv, the capital.

Russian forces pummeled Chernihiv both on their way in and during their withdrawal from the region last week after Moscow decided to concentrate its efforts in contested areas of eastern and southern Ukraine, which is braced for a major Russian offensive.

The scars of war are fresh in Chernihiv, a sparsely populated region that borders both Russia and Belarus, an ally in Vladimir Putin’s military campaign.

The region has been left without electricity, its modest industrial sector is in tatters and its road network is littered with the detritus of battle.

“We can’t relax because the Russians could come back. They have regrouped to head east, but you never know,” Igor says, adding that his immediate priority is to get the Utex factory up and running again — the Chernihiv company had 100 workers on its books.

Russian soldiers occupied the Utex factory for a month and evidence of their stay is strewn among the rubble, from dirty pans, jars of pickles to military jackets and boots.

As well as launching attacks from the factory, Moscow’s military men used it as a base to loot nearby settlements, including Shestovystya, where many Utex workers live.

In the nearby village of Kyinka, Mykola Timochenko, 68, has begun to repair the damage sustained to his home, which was caught in the cross-fire of Ukrainian and Russian troops.

The settlement was used by Ukrainian armed forces as an outpost to counter the advance of Russian troops from the Utex factory site and Chernobyl, which is just 30 kilometers away.

“In the first attack, on the first day of the invasion, all the windows of the house broke. I covered them with plastic and we hid in the basement. Later the roof was destroyed,” Mikola says.

Over time, he grew used to the sound of missiles, bullets and grenades and was able to judge the level of danger based on the noise a projectile made.

“If you heard a whistling, you had to hide quickly,” he tells Efe, adding that several of his neighbors were killed by the fighting and that he helped to bury their bodies in a nearby garden.

Mikola complains of a lack of humanitarian aid in the region and says there are not enough resources at his disposal to carry out his repair work.

Help is slow to arrive for the residents of Chernihiv’s Voikova Street, too, where on March 3 a Russian airstrike dropped six bombs in a matter of seconds, killing 59 people and unleashing widespread material damage on the surrounding buildings.

At least 700 people were killed during Russia’s occupation of Chernihiv, according to preliminary data collected by local authorities.EFE 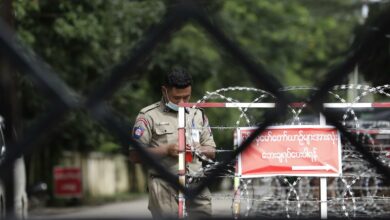