Minneapolis, Minnesota, Mar 30 (efe-epa).- The second day of the trial of former Minneapolis police officer Derek Chauvin, charged with murdering George Floyd last May, heated up on Tuesday with the testimony of several eyewitnesses to the man’s death.

“He (Chauvin) just stared at us, looked at us. He had like this cold look, heartless,” teenager Darnella Frazier said, adding that as she and other passersby yelled him to let Floyd up he did not change anything that he was doing.

“(Floyd) was suffering. He was in pain,” she told the court in her emotional testimony. “I heard George Floyd saying, ‘I can’t breathe. Please. Get off me. I can’t breathe.'”

Using her smartphone, Frazier videotaped the incident, a video that went viral on the social networks, and in it Chauvin can be clearly seen kneeling on Floyd’s neck for some nine minutes.

The now-18-year-old Frazier, who at the time of Floyd’s death was a minor, said that the accused was pressing his knee “harder” onto the subdued African American’s neck as time went by.

Before the young Minneapolis resident offered her testimony, Donald Williams delivered his own version of events. He was considered to be a “crucial witness” because he has been a mixed martial arts professional and security agent and knows techniques for physically immobilizing and choking people, and he was asked about that by prosecutors.

In his testimony, Williams explained that he called 911 to complain about the officers implicated in the incident because he believed that he had found himself a witness to “a murder.”

“I did call the police on the police … because I believe I witnessed a murder,” Williams, a former member of a college wrestling team, said when questioned by prosecutor Matthew Frank.

He said that at first he tried to reason with the officers present at the crime scene when he saw how Chauvin was pressing his knee onto Floyd’s neck, but because they ignored him, he called 911.

On that call, which was replayed in the courtroom, Williams can be heard telling an operator that a police officer was “trying to kill” someone in front of the Cup Foods store, where Floyd died.

Williams, a private security worker, also told the jury that he saw Chauvin use a so-called “blood choke” on Floyd, who was pinned on the ground, handcuffed and “pretty much pleading for his life.”

These two witnesses markedly heightened the tension within the courtroom, with both prosecutors and Chauvin’s defense team asking the judge not to place on record about a dozen questions from them both after they were formulated or after the witnesses’ responses, while the judge had to stop the proceedings on several occasions to speak in private with both sides.

With their questions, the ex-policeman’s attorneys sought to convince the jury that the officers present – Chauvin, Tou Thao, Thomas Lane and J.A. Keung – felt “threatened” when passersby “berated” them during the time that the accused in this trial was kneeling on Floyd’s neck, cutting off or severely restricting the blood supply to his brain and/or oxygen to his lungs.

Outside the Hennepin County Government Center, where the trial is being held, the situation was calm on the streets, a far cry from the disturbances that erupted there in 2020 in the days and weeks after Floyd’s death.

At the end of the trial’s first day on Monday, about 200 people demonstrated near the courthouse shouting slogans against police violence and the US judicial system such as “No Justice, No Peace, Prosecute de Police” and “Chauvin, Guilty.”

However, since he does not have a criminal record he could only be sentenced to a maximum of 12.5 years behind bars on those charges and to four years on a third charge. 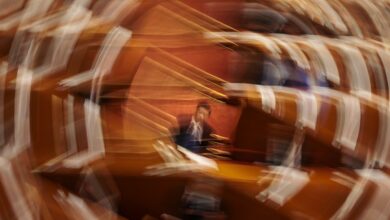