Davos, Switzerland, May 24 (EFE).- Over 1.3 million Ukrainians have been forcibly displaced to Russia as the deportation of civilians to the enemy territory continues, Ukrainian ombudsman, Lyudmila Denisova, told Efe on Tuesday.

Out of the 1.3 million civilians, 240,000 are children, Denisova, who is participating in the World Economic Forum in Davos, said.

The ombudsman claims that the Kremlin had already planned to deport Ukrainian civilians to its territory before invading Ukraine on February 24, exactly three months ago.

“On February 18, the Russian government told local authorities how many temporary accommodation centers had to be set up for Ukrainians who would be taken there,” Denisova told Efe.

“There were previous plans,” she added.

Denisova said she received the information from Russian volunteers who oppose president Vladimir Putin’s war and are risking their lives by collaborating with Ukraine.

She added that civilians are being taken to remote places in Russia.

“A group of 300 people from Mariupol, 122 of whom were children, were forced onto a train by the Russian border police and taken to Vrangel, 1,500 kilometers from Mariupol in eastern Russia, where they are living in very precarious conditions,” she said.

Denisova’s team are working around the clock to gather information on alleged war crimes committed by Russian forces.

“We have a special hotline that we opened on the very first day of the invasion and so far we have received 44,000 calls telling us about human rights violations against 87,000 people,” she said.

Denisova said she believed it was possible to bring the perpetrators of war crimes before international courts, including Putin himself.

“It will not be easy, but if the International Criminal Court investigates everything well and recognizes Putin as a war criminal, then 121 states that have ratified the Statute will be able to arrest him if he comes to their territories and he will not be able to leave Russia,” she said. EFE 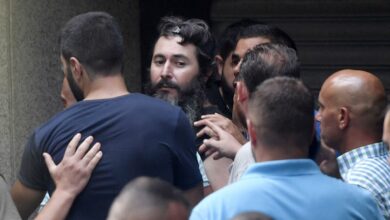