Copenhagen, Oct 8 (efe-epa).- The World Health Organization and Greta Thunberg have been widely tipped to become this year’s Nobel Peace Prize winner but there is no clear favorite to succeed Ethiopian president Abiy Ahmed.

The WHO and Thunberg were both candidates last year and lead bookmakers’ odds for the 2020 edition of the award ceremony but there are potential weaknesses for both nominations.

For the WHO, which has been put forward for its Covid-19 response there is the issue that the final deadline for submitting a nomination closed by February, which was before the outbreak became a global health crisis.

Thunberg, who is to turn 18 in January, was one of the strongest contenders in 2019.

The teenager first made a name for herself protesting outside the Swedish parliament building every Friday to urge more action against the climate crisis.

The movement swelled to global proportions with FridaysForFuture, which saw millions of young people take part in school strikes and marches around the world.

It culminated in the young Swedish activist holding high-level addresses at the United Nations.

But neither the WHO nor Thunberg conform exactly to the criteria stated by Alfred Nobel when he created the prize.

He said the award should be given to those who “have done the most or the best work for fraternity between nations, for the abolition or reduction of standing armies and for the holding and promotion of peace congresses.”

But the Norwegian Nobel Committee, which is set to announce the winner on Friday, has not always stuck to those criteria in its decision-making and has on three previous occasions given the award to environmentalists, such as Wangari Maathai in 2004 and Al Gore and Rajendra Pachuari in 2007. 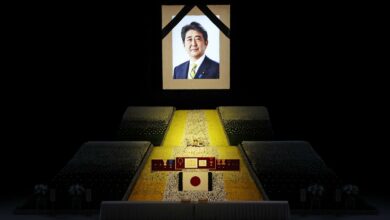 Hundreds of Japanese bid final goodbye to Abe with flowers