Beijing, May 10 (EFE).- China’s president Xi Jinping on Tuesday asked his French counterpart Emmanuel Macron to promote the “correct perception” of Beijing to the European Union and to avoid confrontation between the blocs.

In a phone call, Xi said he hoped France would “promote a correct perception of China in the EU and working in the same direction, managing differences and building on common interests for further trade cooperation and on ‘green’ and digital development”.

The Chinese leader also hoped that France, as the current holder of the rotating EU Council presidency, would play a positive role in the development of the China-EU relations, according to a Chinese foreign ministry statement.

In a separate statement, the French presidency said that Macron “insisted on the importance of progressing towards a rebalancing of the Euro-Chinese relationship in the direction of greater reciprocity.”

They also addressed the situation in Ukraine, stressing the need to reach a negotiated peace, according to the statement.

China “works in its own way” to promote peace talks, Xi said, adding that Beijing supports European countries in keeping security “in their own hands.”

Macron highlighted the “many issues on which his country and the Asian giant coincide” with respect to Ukraine, according to China’s statement.

The Élysée Palace, for its part, said the two leaders “reiterated their commitment to respect for the territorial integrity and sovereignty of Ukraine.” EFE

Santa Claus wants a present: To become a US lawmaker

Rights need to be seen from cultural standpoint in Afghanistan: Taliban 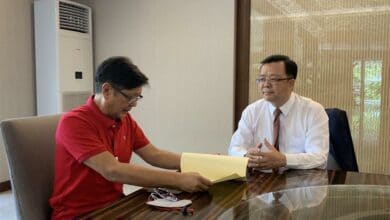