The Blaugrana improved to 13 points, 1 better than reigning champions Real Madrid, but the Blancos have a game in hand. Atleti, with 10 points from five matches, are fourth.

Barcelona were up 2-0 on goals by Frenkie de Jong and Robert Lewandowski when the contest at Nuevo Mirandilla stadium in Cadiz was suspended inside the last 10 minutes of regulation due to a medical emergency in the stands.

Cadiz goalkeeper Jeremias Ledesma leapt into the stands with a defibrillator and players from both sides were seen praying as medics worked to stabilize the stricken man for transport to the hospital.

Ansu Fati and Ousmane Dembele scored after play resumed to make the final score 4-0. Lewandowski, who spent the first hour on the bench to get some rest ahead of the midway Champions League clash against his former club, Bayern Munich, assisted on both of the late goals.

In Madrid, Atleti backup goalkeeper Ivo Grbic made two stops against Celta in the first four minutes before the Angel Correa put the hosts ahead in the 9th minute with an assist from Rodrigo de Paul.

De Paul went on to make it 2-0 five minutes into the second half and Yannick Carrasco added a third goal in the 66th only to see Gabri Veiga pull one back for Celta in the 71st minute.

Matheus Cunha, who came in as a sub for De Paul, snuffed out any hopes of a Celta comeback with a dazzling end-to-end rush that resulted in an own goal charged to defender Unai Nuñez.

Sevilla traveled to Barcelona for their game against Espanyol badly in need of a win after opening the campaign with a draw and three defeats.

The visitors were up 3-0 headed toward the break thanks to a goal in the 1st minute by Erik Lamela and a brace from Jose Angel Carmona.

But Joselu converted from the spot after a controversial hand ball penalty in first-half stoppage time to reduce the deficit for the home side.

Espanyol’s Martin Braithwaite turned up the pressure on the visitors with a goal in the 62nd minute, but Sevilla managed to hand on for the 3-2 win, despite going down to 10 men in the 84th minute with the expulsion of Lamela after the Argentine picked up a second yellow card. EFE jap/dr 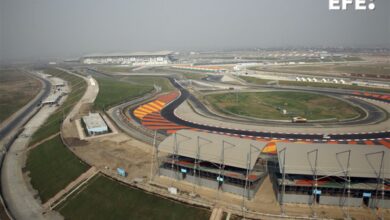 Haaland mania, how to fill the Etihad