Marrakech, Morocco, Aug 6 (EFE).- Mushi Halioua is the only Jew still living in the Jewish quarter of the western Moroccan city of Marrakech, where he runs a textile shop.

His small business, in a square on the edge of the Jewish quarter, has been in his family since 1962, when they arrived in Marrakech from Zagora, 350 kilometers to the southeast.

Unlike most of the Jews who left Morocco after the creation of the State of Israel in 1948, Halioua’s family moved within the Arab country, which is now home to some 3,000 Jews compared to 400,000 in the 20th century.

The 70-year-old tells Efe how the exodus took place in Marrakech, a city that once had 35 synagogues and a community of tens of thousands of people.

Currently, the Moroccan city houses two temples and barely 200 Jews –including 70 foreigners from countries like France, the United Kingdom or the USA.

The community could benefit from the renewal of ties between Israel and Morocco in 2020, which boosted the number of Israelis visiting the kingdom (between 200 and 300 per week) thanks to direct flights between.

Halioua’s shop as become popular with tourists, who exchange a few words with him in Hebrew.

He has even received the chief of the Israeli General Staff, who included his shop in his official visit to Morocco at the end of July. “I’m the only one, there’s no one else,” he says.

Halioua remembers growing up among many Jews in Zagora, but they all left in the 1960s, he says.

“All these stores that you see around here belonged to Jews. In the neighborhood there were no Arabs before,” he says, sitting at a table surrounded by colored fabrics that are sold by the meter in a country where many people still make their clothes in dressmakers and tailors.

He remembers how the Jewish quarter, a crossroads of streets in the ancient city, was closed every Friday and reopened on Saturday night for Shabbat. “There was a wall and the Muslims did not enter.”

Halioua says he does not want to go live in Israel, where he had already tried living in the 70s. “It didn’t go well and I came back, I work very well here,” he says.

His relationship with his neighbors is very good. “I don’t work with the Jews, but with the Arabs,” he adds.

Halioua, who lives with his wife on the top floor of his store, remembers how in Marrakech “there were many synagogues and there are only two left.”

One of these is Alazmah, located a few blocks away from Halioua’s shop. It was built by the Jews expelled from Spain in 1492, earning it the nickname of ‘the synagogue of the deportees’.

Jackie Kadouch, president of the Jewish community in Marrakech, says that prayers are held daily, mainly thanks to Israeli tourists, in both temples.

“It’s very good, there’s a lot of tourism and every group that comes through here, they come to see me, just to say hello,” Halioua says, as he gets ready to serve the next customer. EFE

Pope to give 4 speeches, celebrate Mass in Kazakhstan next month 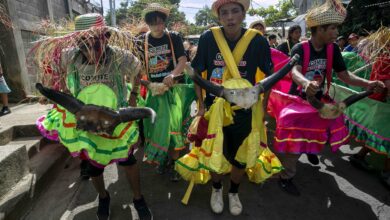