London, Feb 18 (EFE).- Millions of people have been told to “stay safe” and travel networks have been disrupted as one of the worst storms in decades hits the United Kingdom.

The Met Office has issued a rare red weather warning, meaning there is danger to life, warning Storm Eunice will bring “damaging and disruptive winds” for most of the UK.

Gusts of up to 92mph have been reported on the Isle of Wight.

Flights at London airports have been canceled and delayed while ferry services between Dover and Calais have been suspended due to “severe weather,” DFDS Ferry Travel said.

Power cuts have left thousands of households without electricity and numerous roads have been blocked by fallen trees and electricity poles.

Hundreds of schools across the UK will stay closed Friday and the Met Office has said people should avoid traveling and stay at home.

No injuries have been reported so far.

Red weather warnings in the UK are rare. The last time the Met Office issued one was in November last year but before that the last one to have been issued was in 2018.

Storm Eunice is also affecting the Netherlands, where the national carrier KLM sait it had canceled 167 flights scheduled for Friday.

“Due to stormy weather in Amsterdam on Thursday 17 February and Friday 18 February 2022, our flights to, from, or via Amsterdam Airport Schiphol may be disrupted,” the company said in a statement.

In neighboring Belgium, authorities were poised to issue code red alerts for coastal areas, where gusts of up to 130 km/h were expected. EFE 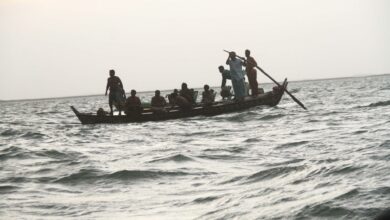