By Sabela Bello and Hector Pereira

Caracas, May 19 (EFE).- She served as Hugo Chavez’s head nurse and also oversaw the administration of Venezuela’s oil wealth, while her husband was the powerful politician’s top bodyguard.

Both with a military background, that married couple exuded power and in the eyes of the Caribbean nation’s people appeared to be honest public servants.

But nine years after the charismatic leftist president died of cancer in 2013, the image of Claudia Patricia Diaz Guillen and Adrian Jose Velasquez has been shattered amid allegations of illicit enrichment and money laundering.

The couple over the years grew closer to Chavez, who himself had been an army paratrooper, and by 2010 had become part of his inner circle, Diaz having risen to the position of the then-head of state’s primary nurse and senior finance official and Velazquez to the post of presidential palace security chief.

Over the next two years, their wealth grew exponentially and beyond what an upstanding government worker could legally have accumulated.

According to Venezuelan prosecutors, during those years Diaz and Velazquez set up seven companies in Panama – activities that led to their being featured in the so-called Panama Papers scandal – and one in the United States “to conceal irregular financial transactions.”

Now aged 48, Diaz spends her nights behind bars in a jail cell in the US state of Florida, while the 42-year-old Velazquez is exhausting his remaining funds to remain in Spain and avoid the fate of his wife, who was extradited last week from that European country to the US.

Both also are wanted in Venezuela on corruption charges.

Before Chavez began suffering from cancer in 2011, his health had been monitored by a medical team that included Diaz, a favorite of the president’s who either impeded or facilitated officials’ interactions with her patient, or at least that was the observation of a source consulted by Efe who worked for the government in those years.

That same source, who spoke on condition of anonymity, recalls the ex-nurse and former navy technical sergeant as a “controlling” woman who was perceived by others as a “sort of head of security.”

The real security chief, Velazquez, was around 30 at that time and had already worked for the Directorate of Military Counterintelligence (Dgcim), a body accused by the United Nations of systematic rights abuses of detainees.

Diaz’s closeness to Chavez grew further as she took on senior finance positions and eventually was named national treasurer.

But upon Chavez’s death in 2013, the couple lost his powerful protection and came under suspicion from officials in the administration of his successor, Nicolas Maduro.

Feeling like the walls were closing in, they initially moved to the Dominican Republic and then relocated to Spain.

Scrutiny of the couple’s surprising wealth accumulation then intensified in 2016, when Venezuela’s Attorney General’s Office raided several of their properties in the South American country and launched an investigation that lasted more than two years.

AG Tarek Saab said the raids turned up numerous money-laundering and illicit enrichment schemes, and his office sought their extradition from Spain in 2018.

Sources with the AG’s office told Efe that on Oct. 25, 2018, Spain’s National Court approved the extradition of Diaz and her husband on charges of money laundering, criminal conspiracy and illegal enrichment.

But that Spanish high court reversed its decision after finding that the couple’s “physical integrity would be at risk” in their homeland, an argument Venezuelan prosecutors slammed as a political decision linked to the Spanish government’s support for the leftist Maduro’s political opponents.

Although the couple thus far have avoided facing justice in Venezuela, Diaz was extradited to the United States last Thursday to face charges of money laundering and accepting bribes from Venezuelan media tycoon Raul Gorrin. 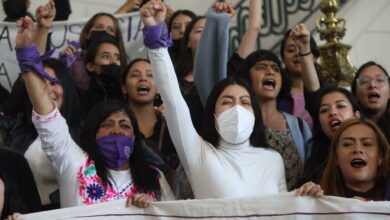