London, Mar 8 (EFE).- Ukraine’s president Volodymyr Zelenskyy borrowed from a famous speech by British war-time leader Winston Churchill on Tuesday as he told lawmakers in the United Kingdom’s House of Commons that Ukraine would not surrender to the Russian invasion.

Members of the UK’s lower chamber of parliament, including Prime Minister Boris Johnson, gave a standing ovation as Zelenskyy tuned in via video link to become the first foreign leader to address the Commons directly.

“We will not give up and we shall not lose (…) We will fight to the end at the sea, in the air, we will continue fighting for our land, whatever the cost. We will fight in the forests, in the fields, on the shores, in the streets,” Zelenskyy said, paraphrasing Churchill’s iconic, World War II-era address.

He thanked the UK government for its efforts to help Ukraine but called for further action, including measures to ensure the safety of Ukraine’s sky, in reference to Kyiv’s reiterated calls for Nato to enforce a no-fly zone, something the Alliance has so far ruled out amid fears it would spark a direct conflict with Russia.

Zelenskyy drew parallels between the Russian invasion of Ukraine and the UK’s war with Nazi Germany, describing the current conflict as one Ukraine neither wanted nor started.

He highlighted Russian military attacks on civilian infrastructure including hospitals and called on the British government to increase sanctions and recognize Russia as a “terrorist state.”

The United Nations human rights office on Tuesday said 1,207 civilians had been killed since Russia launched its military operation against Ukraine, although it clarified that the exact number was likely much higher. EFE 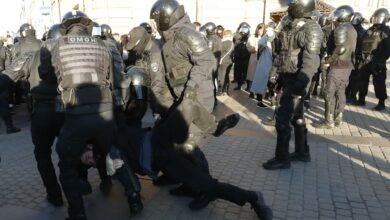 Hundreds detained in Russia in 2nd round of anti-war protests

Putin cracks down on Russian soldiers refusing to fight

Pro-Russians accuse Ukraine of attacks to prevent voting in referendum