Beijing, Nov 8 (EFE).- A Chinese astronaut on Monday became the country’s first woman in history to walk in space as she and another Shenzhou-13 crew member stepped outside the space station’s Tianhe core module for the first time.

The 6.5-hour spacewalk was carried out by Zhai Zhigang and Wang Yaping, who became the first Chinese woman to execute a spacewalk, the China Manned Space Agency said in a statement Monday.

The CMSA said that the mission was “successfully completed” at 1.16 am Beijing time, after the pair finished “tasks such as the installation of the robotic arm suspension and adapters,” and tested the performance of China’s new-generation spacesuits, the ability of the astronauts to work with the robotic arm and the reliability and safety of the supporting equipment.

The “taikonauts” (as astronauts are known in Chinese) were in contact with the Beijing Aerospace Flight Control Center during their outdoor mission at the space station, named Tiangong, or “Heavenly Palace.”

Zhai, Wang, and Ye arrived at the space station on Oct. 16 aboard the Shenzhou-13 spacecraft.

Shenzhou-13 is the fourth spacecraft to visit Tiangong and the second with a crew after Shenzhou-12’s three astronauts returned to Earth last month following a three-month stay.

The space station is expected to be operational by the end of 2022 once the crews of the future Shenzhou-14 and Shenzhou-15 missions complete its construction.

The Tiangong will weigh about 70 metric tons and is expected to operate for 15 years, orbiting about 400 kilometers (248 miles) above the Earth’s surface. EFE 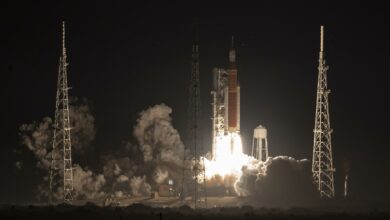