Masaya, Nicaragua, Apr 3 (EFE).- Susana Ríos took her two-year-old dog Kira to the Santa María Magdalena church in the Nicaraguan city of Masaya on Sunday to thank Saint Lazarus for having healed her pet.

In the church, devotees ask for good health for their pets and, in return, attend mass in honor of the saint.

Ríos was one of hundreds of devotees who dressed up their dogs and attended the mass in the church for Saint Lazarus, revered in Nicaragua as the saint of pets and protector of animals.

“We came to fulfill a promise to Saint Lazarus because she (Kira) is alive,” Ríos, a native of Masaya, told Efe.

With tears in her eyes, she reported that Kira had been in poor health because she suffered from parvovirus.

“I told (the saint) that I was going to bring her walking from the house so she can place her candle for the saint and he can bless her with his miracle,” added Ríos, who went to mass with three pets, all survivors of the same disease.

The church welcomed hundreds of pets dressed in hats, gala dresses, bows and ballet outfits and who were presented by their owners before Saint Lazarus, asking mostly for the good health of their puppies.

With candles and flowers, devotees gathered at the church, located in the city of Masaya, 26 kilometers southeast of Managua.

This annual pilgrimage is deeply rooted in this Central American country and is celebrated prior to Holy Week.

She told Efe that her pet has been undergoing veterinary treatment for a month because he is listless and lacks appetite. Therefore, she said, she offered to dance to the church if Saint Lazarus would restore her pet’s appetite and spirit.

White-furred Tonky was raised at the feet of the saint, placed on a pedestal and adorned with flowers and candles.

Breeds such as German shepherds, chihuahuas, pitbulls and chow chows were presented before the small image, located on the right side of the parish.

The day included a pilgrimage with the saint, and awards for the best costumes, with the winners receiving special food prizes. In addition, the Ministry of Health carried out rabies vaccinations. EFE 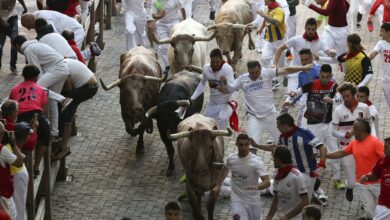